Everything you need to know about sepsis detection protocols that are saving lives and reducing costs through home care — plus next steps for broader application (www.stopsepsisathomeny.org)

September is “Sepsis Awareness Month,” and the Home Care Association of New York State’s national-first sepsis screening program for home care nurses and providers is making major strides in addressing this medical emergency — sepsis — a condition that claims a life every two minutes (according to Sepsis Alliance) and is more likely to occur in the home and community than in a hospital.

“Data suggests that 80% to 90% of sepsis cases actually originate in the home or community,” says HCA President and CEO Al Cardillo. “This fact alone is one of many reasons why home care’s involvement in sepsis screening is so vital, and why protocols, like HCA’s program, are incredibly important when it comes to improving outcomes and saving lives in a home care population that is especially vulnerable. All sectors of the health care system have a responsibility to intervene — and, wherever possible, prevent — the tragic loss of life, morbidity and life-altering effects of this condition. The home care system is especially equipped to do so.”

Sepsis is a life‐threatening condition caused when the body’s immune system wages an over‐aggressive response to an infection, often injuring the body’s tissues and organs. It affects nearly 2 million Americans annually — 15% to 30% of whom will die. It can also have tragic after-affects, such as loss of organs and limbs and post-sepsis syndrome. It is the number-one cost of national hospital care and the number-one cause of potentially avoidable hospital readmissions. As an illustration, historic Medicare data for New York finds that over 8,500 hospital cases annually for sepsis involved patients for whom home care screening could have had a direct impact. Based on New York’s average per-case Medicare fee-for-service cost of sepsis-related hospital care ($23,050), these hospital cases cost Medicare approximately $196 million a year, not counting other non-Medicare payor sources.

The HCA-developed sepsis screening tool directs home care RNs, PTs and other clinicians to assess for infection-related and other criteria signaling sepsis risk at every home care visit where care is being rendered. Based on these assessments, a corresponding algorithm guides a series of follow-up steps, dependent on the assessment’s findings, which may range from further education of the patient and family, to in-home treatment with a physician, to the ER when emergent.

This standardized in-home tool aligns with sepsis screening requirements in hospitals under the 2013 “Rory’s Regulations.” An HCA sepsis workgroup led by HCA member Amy Bowerman, RN, and a team of clinicians worked with HCA to develop the tool — among them, leading nurses and physicians involved in hospital protocols, promoting seamless practices. A grant from the New York State Health Foundation was especially important in helping to roll out the screening program and protocols statewide.

Home care and other providers must obtain a user agreement in order to use the tool with prerequisite training through HCA’s Stop Sepsis at Home New York program. (Please see HCA’s Stop Sepsis at Home New York website for more information about the steering committee and project team for this tool, as well as core project partners like the Rory Staunton Foundation for Sepsis Prevention, Sepsis Alliance and clinical experts from IPRO, New York State’s quality improvement organization: https://stopsepsisathomeny.org/partners/meet-our-project-committee/.)

Today, nearly all 62 counties in New York State are served by a home care agency trained and authorized to use the sepsis tool, with total potential caseloads exceeding 330,000 patients to date — and growing. In fact, providers and systems in other states have already begun using the HCA tool in collaboration with HCA. The U.S. Centers for Medicare and Medicaid Services (CMS) also recently featured the tool, HCA’s preliminary outcomes data, and HCA’s work to a national “provider partners” audience. The tool was chosen for use in a special CMS project under the direction of IPRO, training over 10,300 clinicians in early sepsis recognition. The program is also receiving a Sepsis Heroes award from Sepsis Alliance during a gala coming up on September 12 to coincide with Sepsis Awareness Month.

Over a one-year period, before implementation of the HCA screening tool (in 2016-17), approximately 8,519 individuals in the home care population were admitted to the hospital with a sepsis diagnosis (Medicare fee-for-service cases). This one year of data suggests a direct home care intervention potential in 8,519 cases of sepsis, and a hospital cost-avoidance potential of $196 million in Medicare dollars — now made possible for agencies using the sepsis tool (see below).

“The Medicare data alone makes a compelling case for home care to wage a comprehensive and vigorous effort to save lives,” Mr. Cardillo said. “Those at highest risk of sepsis include the elderly, chronically ill, individuals with recurrent pneumonia or chronic UTIs, and post-surgical cases, where the susceptibility of infection-driven sepsis can be most serious.”

Case Example: Millions of Dollars in Cost Savings Potential for One Agency Alone

As a case example, one agency utilizing HCA’s tool has so far identified 218 cases meeting sepsis criteria that led to intervention at home (by the home care agency and/or collaborating physicians). Another 258 of this agency’s cases met the criteria for “severe sepsis,” leading to anticipated interventions with physicians and EMS/hospital partners, thus totaling 476 total cases meeting the criteria for sepsis and severe sepsis detected through the HCA tool.

To illustrate the cost-savings impact, HCA has modeled some scenarios that conservatively suggest the potential for as much as $9.2 million in cost savings attributable to these screenings.

This illustration (see chart below) uses the average of the median cost of sepsis care in New York State hospitals and applies a set of assumptions for the 476 cases whereby: 1) hospitalizations were averted in some cases; and 2) hospitalization occurred but for a shorter length of stay due to early detection through the screening tool. (Indeed, mortality increases 8% per hour that care is delayed, according to Sepsis Alliance.) 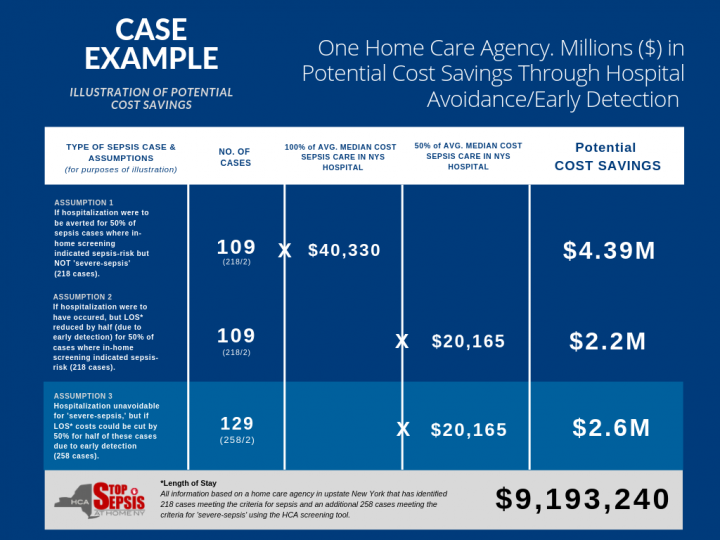 “These direct outcomes and illustrations are compelling enough; yet there are myriad other subsidiary public health and system benefits that accrue from standardized in-home screenings like HCA’s,” Mr. Cardillo said. “This includes earlier identifying and treating other infection-related diagnoses, as well as a systematic process where home care agencies and hospitals are, in effect, using the same ‘language’ to coordinate care. This procedural linkage is critical upon hospital admission and, later, at discharge, where a post-acute home care provider can address complex post-sepsis care needs, including patients with wounds, catheters, sepsis-related amputations, and other post-sepsis syndrome conditions at home. This is especially important for monitoring the substantial number of cases where sepsis can reemerge.”

“Home care’s post-acute sepsis role also has the power to avert or mitigate long-term disability as well as extraordinarily catastrophic health care costs – a great deal of which is a cost to the state Medicaid program,” he added.

In June of 2019, the New York State Legislature passed a bill in both houses that would, if signed into law, buoy the state Department of Health’s support for HCA’s screening initiative and its support for public health overall (S.1817-Gustavo Rivera/A.3839-John McDonald).

This bill would support: clinician training on the sepsis screening tool pioneered by HCA; integration of home care-sepsis screening data and outcomes within electronic health records; the creation of sepsis collaboratives with other settings for timely response to the sepsis crisis; community outreach and public education; and state authority to approve grants or other funds for supporting home care-sepsis intervention goals. (Please see our press release for more information here: https://stopsepsisathomeny.org/ny-legislature-passes-nations-first-sepsis-education-and-support-initiative-for-home-care/.)